Posted on January 10, 2019 by Gillian Jones
On Artsinspire Japan Autumn tour October 30 – November 13, 2019 you will visit Kyushu, the most southern of Japan’s main islands. You will be immersed in Kyushu’s rich Shinto mythology, arts, and the history of Japan’s move into modernism in the mid 19th century. You will experience the friendliness of a small town bamboo light festival, the spiritual intensity of a 1500 year old fire ceremony, and the peaceful ambience of several styles of garden. You will stay at a beautiful hot spring ryokan and modern hotels, learn about several pottery traditions, and gain a deeper understanding of World War II by visiting Chiran Kamikaze Museum and Nagasaki Atomic Bomb Museum. Kyushu is off the normal tourist track and previous participants have really enjoyed being the only non-Japanese in many of the places we visited. Artsinspire tours give you rich experiences in less travelled parts of Japan. Our groups are small so we can give you personalised attention and include your special interests.
Posted in Uncategorized | Leave a comment

Posted on September 1, 2016 by Gillian Jones
A torii stands at the entrance to Shinto Shrines throughout Japan demarcating the boundary between the non-sacred and the sacred. This one is at the original site of Kirishima Jingu where every year on November 10th a fire ceremony is held to celebrate the descent of the goddess Amaterasu’s son Ninigi-no-mikoto’s descent from heaven. Join the Japan autumn tour in November 2017 to participate in this fabulous community event.

As the sun sets behind the Torii, the priests start chanting to the music of ancient kagaku instruments. The mood is solemn and eerie on this mountainside where once stood the Kirishima Jingu Shinto Shrine before it was moved to lower ground away from the danger of volcanic eruption. The participants in the Japan autumn tour bow with silent locals during prayers and dedications. The priests throw wooden plaques on which people have written prayers into the fire so that the prayers will rise up with the smoke from the sacred fire. Taiko drumming and sake The mood becomes festive as drummers dressed as mountain spirits with long yellow and red tresses drum up a celebration of the relationship between nature and man. As the drums start, lights can be seen on the mountain top as climbers start their descent from the volcanic ridge to join the celebrants at the fire. Next, local residents perform a play, to the sounds of drums and flute, depicting one of the many stories of the gods’ bounty. When the play is over, participants in the Japan autumn tour line up with the locals to receive mochi (pounded rice cakes) and a package of rice, kombu seaweed, and katsuobushi (dried bonito) – the symbolic basis of a meal to be taken home as a talisman. The coals from the sacred fire are pulled to the side, grills placed on top so that the mochi can be toasted while priests, locals, and Japan autumn tour participants chat and drink warming sake.
Posted in Uncategorized | Leave a comment

Posted on August 15, 2016 by Gillian Jones
Only 12 “original castles”, i.e. castles with a main keep that dates from the feudal era (before 1868), still stand in Japan today. We will visit 3 of these on the Artsinspire (www.myjapantour.com) spring tour, March 31 – April 12, 2017: Inuyama, Himeji, and Matsue castles. 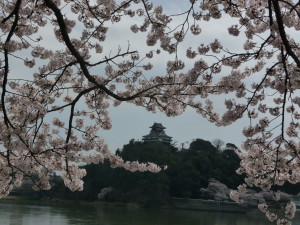 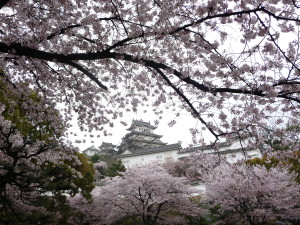 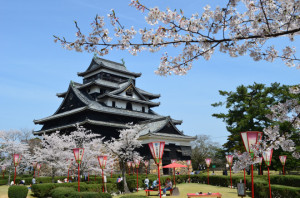 Posted on May 23, 2013 by Gillian Jones
On the Japan spring tour from which I have just returned, we had one of those serendipitous events which so often occur on my tours. Looking for a coffee, we stumbled upon an antique shop which had a sign suggesting it was also a cafe. There we met this extraordinary trio – father and two sons – who competed for our attention with demonstrations of ancient swords and deep philosophical discussion. We were taught the etymology of the word for thanks in Japanese, liked the coffee, and bought a few highly discounted bargains. We all had a visceral experience of the Japanese Zen philosophy of “ichi-go ichi-e” “One time, one meeting” which emphasizes the unique opportunity presented by each interaction.

An Aesthetic of Acceptance

Posted on November 7, 2011 by Gillian Jones
In my daily life I am able to identify a particular aesthetic understanding which had developed in me during several years living in Japan. This way of interacting with the world is closely aligned to Zen and Wabi-Sabi both of which share many core theoretical tenets. Wabi-Sabi is an appreciation of the imperfect, impermanent and incomplete; of that which is modest, humble and unconventional; of things as they are in this moment.

Several years ago I attended an exhibition of the art of 19th Century Zen nun, Rengetsu. The art works in the exhibition are simple ceramic containers with poems inscribed on them in fine, cursive calligraphy. The poems and the simple containers speak to the ephemeral nature of life. In the exhibition there was a set of tea cups of which one had been broken and had been mended with gold. Instead of discarding or attempting to invisibly mend the broken cup, gold had been laid upon the crack so that the ‘visible mending’ became accentuated. The imperfection was celebrated as an accidental addition worth appreciation.

They are an embodiment of Wabi-Sabi : finding beauty in imperfection, profundity in nature; and accepting the natural cycle of growth, decay, and death. This approach to art and life is simple, slow, and uncluttered. It reveres authenticity above all. It celebrates cracks and crevices and all the other marks that time, weather, and use leave behind. It reminds us that we are all transient beings on this planet – that our bodies as well as the material world around us are in the process of returning to the dust from which we came. Through Wabi-Sabi, we learn to embrace transience and the ephemeral nature of everything.

Posted on October 12, 2011 by Gillian Jones
I am very drawn to the idea of what is ‘enough’ in the following quote by the Zen teacher Taisen Deshimaru.

‘Zen is not a particular state but the normal state: silent, peaceful, unagitated. In Zazen, neither intention, analysis, specific effort, nor imagination takes place. It’s enough just to be without hypocrisy, dogmatism, arrogance: embracing all opposites.’

I am intrigued at how and to what extent Deshimaru sensei embraced all opposites and overcame hypocrisy and dogmatism  when, as a young man in the Second World War, he was assigned to the island of Bangka. Apparently, Deshimaru opposed the ruthless way in which the Japanese occupiers treated the inhabitants of Bangka and tried to protect the westerners, Chinese, and Indonesians living there. For this he was imprisoned as a traitor by the Japanese but was unexpectedly released and sent to Belitung, another Indonesian island. At the end of the war he became a prisoner of the Americans before being repatriated. I have been unable to find out whether Deshimaru was in Bangka in 1942 when 22 Australian nurses were ordered to walk into the sea and mown down by Japanese machine gun fire. Only one, Vivian Bullwinkel, survived and gave evidence at the war crime trials in Tokyo.  In 1967 Deshimaru moved to Paris where he taught Zen and became head of Japanese Soto Zen for Europe.

As an Australian who has a deep connection to Japan, the Japanese, and the philosophy of Zen, I struggle to embrace the opposites that are present in this story. Were the opposites present on the day of the Bangka massacre those of innocence on the part of the nurses and brutality on the part of the Japanese? Or were they fear and hatred? Emotions, in all likelihood, felt by both the nurses and their slayers?

What feelings of fear and hatred can I identify in myself? How do I embrace both my fear and my hatred? Will that be ‘enough’?
Posted in Australia Japan relations, Enough, Zen | Leave a comment